Corn Hill, a historic treasure on the banks of the Genesee River next to Center City, offers the best of the old and new. It is a revitalized landmark community full of restored 19th century homes in a variety of modest and elaborate styles that are blended well with 20th century townhouses and condominiums. In most cities these kinds of neighborhoods are only accessible by the wealthy but here in Rochester, people from all walks of life make Corn Hill their home.

Beautiful Frederick Douglass Circle and Park pay tribute to the man who published his pioneering North Star abolitionist newspaper out of the Memorial African Methodist Episcopal (AME) Zion Church, a center for the Underground Railroad. Just a few blocks away is Clarissa Street. Once referred to as “Rochester’s Broadway,” it became famous for jazz and clubs such as the Pythodd Club and the Elk’s Club. From the 1950’s through the early 1970’s, the clubs drew musicians and vocalists from all over the country including Miles Davis and Sarah Vaughan.  The streets of Corn Hill were familiar to Nathaniel Rochester, Susan B. Anthony, Harriet Tubman, Ralph Avery and countless others who made important contributions to the development of our community and our nation.

Today, residents whose families have been in the neighborhood for generations live side-by-side with young urban professionals and empty nester suburbanites. Regardless of their backgrounds, people are drawn to Corn Hill for its history, proximity (walking distance to downtown and the University of Rochester) and for its sense of community.

For decades the Corn Hill neighborhood has hosted the Corn Hill Arts Festival, which has grown from a small gathering of artists to more than 400 artists and craftspeople from throughout the United States. Since the late 1960’s, the festival has been organized by a dedicated group of neighbors and is attended annually by more than 200,000 people.

The Corn Hill Neighbors Association is one of Rochester’s most active neighborhood associations, working hand in hand with city government and other neighborhood groups to provide for the continuing improvement of the neighborhood. Corn Hill Landing, located on the west side of the Genesee River, is home to some of Rochester’s best known restaurants and also offers luxury river-view apartments.

The Landmark Society of Western New York is proud to be located in Corn Hill at 133 S. Fitzhugh St. 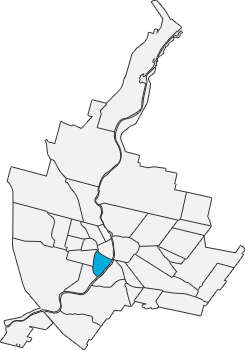