From Frederick Douglass publishing the North Star abolition newspaper, to the Underground Railroad stations located throughout the city, to the pioneering equality work of tireless suffragist Susan B. Anthony, Rochester boasts an impressive progressive history.

The Susan B. Anthony neighborhood, just west of downtown, is the only surviving example of an early-nineteenth century tract development. The neighborhood retains its original public square and alley configuration, commercial strip and industrial area, as well as the majority of its residential buildings. These homes were built primarily by middle and working-class residents and showcase historical architectural styles, from Greek Revival to American Foursquare. The neighborhood features beautiful historic homes which have been adapted for modern use as artist lofts and a variety of rental options. 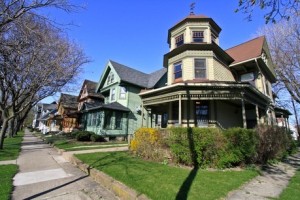 During her political career, Anthony lived on Madison Street with her sister, Mary, who in 1868 became the first female principal of Rochester City Ward School #2. The Anthony family home and the house next door now compose the National Historic Landmark Susan B. Anthony House Museum and Visitor’s Center, which attracts visitors from around the world.

The legacy of Frederick Douglass, escaped slave, abolitionist leader and statesman and personal friend and political ally of Anthony during his time in Rochester, looms large over the neighborhood. Their partnership impacted both civil and human rights for women and African Americans and in 2001 was memorialized in a bronze statue, “Let’s Have Tea,” created by Rochester sculptor Pepsy Kettavong.

The “1872 Monument” at Canal Street at 439 West Main Street, also created by Kettavong, marks the location where Susan B. Anthony, with fourteen other women, illegally voted in the 1872 presidential election.

Anchored by Susan B. Anthony’s house and museum on Madison Street, the serene public square with its engaging sculpture of Susan and Frederick Douglass having tea, and the Frederick Douglass Resource Center, the neighborhood offers an array of opportunities to live amidst this history, while still close to Center City and many of the city’s cultural and recreational activities.

The commercial spine along Main Street has recently seen a growth of residential options in the new Voters Block, and the rehabilitation of the Frederick Douglass Apartments. Major rehabilitations are also anticipated for the neighborhood’s historic industrial buildings – the Carriage Factory Apartments development just completed in 2015. 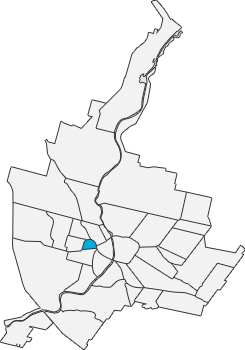