Close to both the Susan B. Anthony neighborhood as well as Center City, the neighborhood formerly called Mayor’s Heights has been rebranded by its strong community stakeholders as “Changing of the Scenes”– which has been shortened to “COTS” –to better reflect its stimulating mix of older and newer residences, commercial and retail establishments, and busy workplaces. With West Main Street as its northern border, the modern-day neighborhood is bounded by Genesee Street on the west, Tremont Street to the east and Dr. Samuel McCree Way/ Ford Street on the south.

Within Mayor’s Heights/COTS is the iconic Nick Tahou’s Hots restaurant, the center of the universe for Rochester’s culinary claim to fame (or infamy?): the Garbage Plate. Also here is the handsome Anthony Square award-winning residential development along West Main Street.

The James and Bessie Hamm House on Adams, home of African-American local heroes who were community leaders, remained for several decades a COTS landmark and was recently updated with a green space to continue to honor the couple. Slated for the new pocket park are a gazebo and a commemorative plaque with a replica of Bessie’s prized possession, a tortoise shell she hung on the wall of her home. This new park joins the COTS’ Rock Garden honoring Willie Lightfoot, who served as County Legislator (District 25) for four decades. 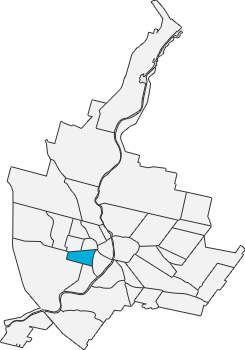